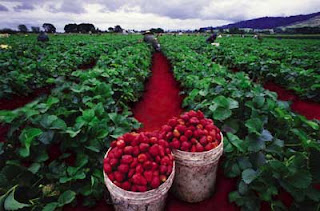 Let me take you down (to the kitchen) 'cause I'm going to (make) strawberry (pancakes), nothing is real(ly as good for breakfast), and nothing to get hung(ry) about; strawberry pancakes forever! Okay, I think I've done what I can with that, but you take my point. Strawberries + pancakes=breakfast happiness. These will be way better with fresh, local berries if and when summer actually arrives, but they were pretty good with the big ol' imported California ones at the supermarket. A stack of these on a Saturday morning will help you face the weekend with a sense of well-being that is positively surreal.

Directions:
~ Preheat the oven to 250 degrees fahrenheit.
~ In a large bowl, sift together all the dry ingredients (flour through baking powder).
~ Stir in chopped strawberries and coat thoroughly with flour mixture; this will give them some "grip" in the batter.
~ Combine the wet ingredients in a bowl or beaker and stir thoroughly.
~ Make a well in the center of the dry ingredients; pour in the wet ingredients and stir to combine.
~ Coat a skillet with cooking spray and place over medium heat.
~ Add the batter by large spoonfuls (I usually cook only one at a time, to ensure a more satisfyingly round, "pancakey" product) and cook about 4 minutes before flipping and cooking another minute or two.
~ As the pancakes are cooked, transfer them to a cookie sheet in the oven to keep warm.
~ Continue until all the batter is used up; serve with Earth Balance, maple syrup, and/or additional sliced strawberries. (Or even, as the song suggests, "cran...berry...sauce...")
Posted by Desdemona at 3:00 AM 8 comments: Links to this post 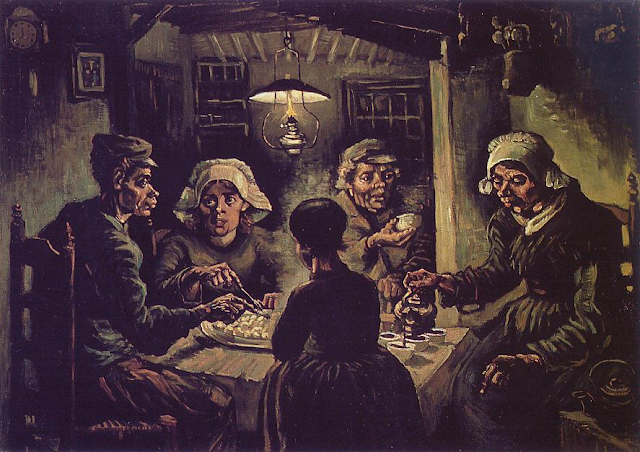 I've already blogged a potato soup, but this one is a little bit different: you see, this time I roasted the potatoes first! This teensy extra step added a very nice flavor to this comforting soup on a miserably rainy April day when some members of my family had a cold, some were grumpy about the last weeks of the semester bearing down us like a hungry grizzly bear fresh out of hibernation, and some were a bit of both. The point is, we needed soup, and this one fit the bill beautifully. Try it and you'll see: there's almost nothing that can't be fixed (at least temporarily) by a nice hot bowl of soup and a hunk of bread.

Directions:
~ Preheat oven to 400 degrees fahrenheit
~ Spread the potatoes on a baking sheet, pour oil and spices over, then coat the potatoes thoroughly (you want to do this with your hands to make sure they're all covered; besides, olive oil is Nature's Wonder Product!)
~ Bake at 400 for 30-40 minutes, stirring occasionally to prevent sticking and ensure they're more or less evenly browned

Directions:
~ While the potatoes are roasting, melt the EB in a large pot and saute the onions and garlic on medium heat about 5 minutes.
~ Add the celery, carrot and spices. Stir thoroughly and continue cooking another 5 minutes.
~ Pour in the stock, cover and bring to a boil.
~ Lower the heat and simmer 15 minutes
~ When the potatoes are done, add them to the pot, replace the cover, and cook another 15 minutes.
~ Remove from heat, add the soy milk, and puree with an immersion blender until smooth.
~ Return to heat and bring to almost (but not quite!) boiling. Adjust seasonings and serve with some good, crusty bread.
Posted by Desdemona at 3:00 AM 3 comments: Links to this post 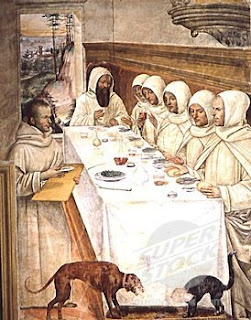 Last Saturday I had the day to myself, which is a pretty rare occurrence. I'd been out late the previous night, and slept in until around ten, waking up ravenously hungry. It was one of those times when you aren't sure exactly what you want, but feel that a "perfect choice" does in fact exist, if you could only put your finger on it. There wasn't a ton of stuff in the house, but I got it in my head that some sort of Benedictish (Benedictine? Do you think that's what he and the brothers are enjoying for their monastic brunch?) affair involving English muffins might be just the thing. There was some leftover cashew ricotta and a few random vegetables in the fridge, so what I wound up doing was toasting the muffins, then adding a thin layer of ricotta, some sauteed veggies and a super-easy "hollandaise" sauce. I slid the whole mess into the oven, and within minutes I had a breakfast that would deserve a place on the menu of my completely hypothetical vegan diner, if it actually existed. I used the ricotta because it was already made, but you could certainly skip it and just layer the vegetables on top of the toasted muffins; if you have potatoes, make some home-fries to go alongside, and you should be at least as contented as St. Benedict himself. (Make sure to follow the Rule which says: "let thy animal friends lick the sauce from thy plates when thou hast had enough." I don't think those dogs are hanging around for sext or terce!)

Directions:
~ Preheat the oven to 500 degrees fahrenheit.
~ Over low heat, melt the Earth Balance in a saucepan. Add the flour and stir to make a roux, adding about 1/2 cup of the soy milk gradually, to keep it from getting too thick.
~ Add the seasonings, nutritional yeast and remaining soy milk, stirring constantly. Cook for about 2-3 minutes, or until the mixture begins to reach the thickness of a hollandaise sauce.
~ Add the lemon juice, stir to combine, and remove from heat.

Directions:
~ In a large skillet or wok, heat the olive oil and saute the garlic and scallions over medium heat about 2 minutes.
~ Add the mushrooms and chopped spinach; cook another 5 minutes or so, until the mushrooms are soft and the greens are wilted. If the mixture seems too wet, raise the heat to high for a minute to let the liquid cook off.

Directions:
~ In a food processor, mix all ingredients to form a smooth, delicious paste.
~ (NB that this recipe makes a whole batch, of which you will need very little for this dish, but my philosophy is always to make a lot and then use the leftovers for something else. If you only want enough for the current recipe, you could just quarter it, but why not make it all, and do another yummy thing this week?)

Assembly
~ Place sliced muffin halves on a greased baking sheet.
~ Spread a thin layer of cashew ricotta on each muffin slice.
~ Spoon roughly equal portions of the vegetable mixture atop the ricotta. (If you have extra just serve them on the side).
~ Ladle sauce over the vegetables; you should have plenty of extra sauce left to spoon over the finished product, too.
~ Bake at 500 degrees for 5-10 minutes, keeping an eye to make sure things don't burn.
~ Serve with extra sauce and, in a perfect world, home fries.
Posted by Desdemona at 3:00 AM No comments: Links to this post