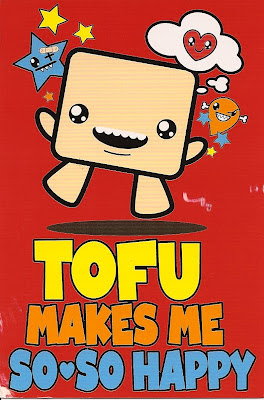 Oh, yeah, it's another glazed tofu recipe. (So sue me, we like our bean curd chez nous.) This one is the conflation of a couple of long-bookmarked recipes for which I always seemed to be missing one essential ingredient. Then lo - finally a day arrived when all the stars and planets were in alignment and my cupboards gave forth the appropriate bounty (or something) to make this yummy, just-spicy-enough dish. We had it on rice with stir-fried broccoli and snow peas, but the sticky glaze would also be nice in combination with pan-fried udon noodles. Maybe next time.
And while we're on the subject of tofu, I'd like to insert a plug for the most useful kitchen gadget since the immersion blender: the Tofu X-Press. Sure, you can do it old-school by wrapping your tofu in some paper towels and piling a skillet and a crapton of canned beans on top, but it won't be pressed as well or as evenly as it will in this baby. Trust me. My only regret is that I didn't get two of them, because around here one pound of tofu is never enough.
Tofu with Sesame-Wasabi Glaze
Ingredients
~ 2 lbs. extra firm tofu, drained and pressed (pro-tip: freeze & thaw before pressing for tofu that sucks up marinade like no one's business)
~ 1/4 cup soy sauce
~ 1/4 cup rice vinegar
~ 1/4 cup agave syrup
~ 3 tbsp. toasted sesame oil
~ 2-3 tbsp. wasabi paste (more or less; suit yourself)
~ 1 tbsp. each: minced garlic, grated ginger
~ 1 tbsp. each: mustard, hot sauce
~ Oil for frying
~ 6 large scallions, sliced
~ 1 cup cold water
~ 2 tsp. corn starch
Directions
~ Slice the tofu in half horizontally, then slice into approximately 1/2-inch strips.
~ In a large, shallow dish, combine all ingredients from the soy sauce through the hot sauce.
~ Place the sliced tofu in the mixture and allow to marinate for at least 30 minutes (longer is better), turning occasionally.
~ Reserving the marinade, fry the tofu slices in a little oil until brown and crisp, then set aside in a warm oven (250 degrees) until all the slices have been cooked.
~ In the same pan, sauté the scallions for about a minute over medium-high heat, then pour in the reserved marinade. In a separate container, combine the cold water and corn starch, mix thoroughly, and add to the skillet.
~ Stir to combine, then lower the heat and let the sauce cook another ten minutes or so, until slightly thickened and reduced.
~ Add the reserved, fried tofu to the sauce, flip a few times to coat, and continue cooking another 5 minutes.
~ Serve over rice.
Posted by Desdemona at 12:00 AM 1 comment: Links to this post 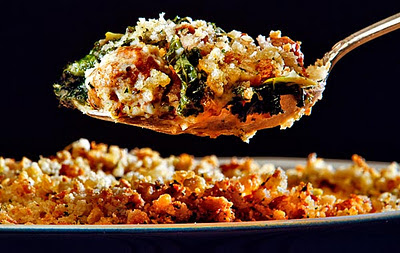 I made this on one of those "what is there in this house that could conceivably be made into dinner?" kind of nights. On this occasion the answer was: a bunch of kale, a package of Trader Joe's veggie sausages, and the usual bits, pieces, and cupboard staples. A desultory search came up with a Food Network recipe that sounded pretty gross (calling for a pound of pork sausage, nearly two sticks of butter, heavy cream, and half a pound of cheese, in addition to the olive oil to sauté the onions, etc.), but had potential. I cut the fat way down, upped the seasonings and vegetables, and generally reduced the likelihood of a major cardiac event. Eked out with some leftover risotto, it made a very good dinner, but it would also be a great brunch dish served alongside hot biscuits or savory waffles. (NB I happened to have Italian flavor sausages in the refrigerator, and proceeded accordingly as to spices; you could obviously use whatever flavor you like and adjust appropriately.)

Directions
~ Preheat the oven to 350 degrees fahrenheit, and coat a small casserole or deep dish pie plate with cooking spray.
~ In a large skillet, sauté the onion in the olive oil over medium heat about 3 minutes, then add the garlic, diced sausage, and dried seasonings.
~ Cook about 5 minutes, stirring frequently, until the sausage begins to brown a bit.
~ Add the wine to deglaze the pan, making sure to scrape up any bits that have stuck to the bottom.
~ Add the kale, stirring constantly, and continue cooking until bright green and just wilted. Remove from heat and set aside while you make...

Directions
~ In a saucepan, melt the margarine over low heat, and add the flour to make a roux (you may need to add some of the warmed soy milk to keep things from getting too gloppy).
~ Gradually stir in the soy milk, mixing constantly, then add the grated cheese, nutritional yeast, and nutmeg.
~ Continue cooking another few minutes, until slightly thickened, and then add to the sausage and kale mixture. Combine thoroughly, then transfer to your prepared baking dish.
~ Combine the panko, the paprika, and the parsley. Sprinkle the mixture over the whole business, spray briefly with cooking spray, and bake uncovered at 350 degrees for 30 minutes, until golden brown.
~ Allow to cool briefly before serving.
Posted by Desdemona at 12:00 AM 1 comment: Links to this post

In the dark and dreary doldrums of February, there are few things more satisfying than a simmering cauldron of soup, and this is a really good one. Perfect for those nights when your tummy wants the culinary equivalent of a hug, it's like a happy marriage between an Indian dal and an old-fashioned split pea soup. The combination of legumes, greens, and sweet potatoes make it balanced meal all on its own, but that's really just a fortunate footnote to its deliciousness. So what are you waiting for? Drag out the soup pot and start soaking some peas!

Directions
~ In a colander, rinse and pick over the split peas, then place them in a bowl of cold water to soak for at least an hour (the longer you soak them, the faster they'll cook).
~ In a large pot, heat the canola oil over medium heat and add the cumin and mustard seeds. Stir briefly and cook until they just begin to pop.
~ Add the ginger, the onion, and the celery, and continue cooking about 5 minutes.
~ Drain and rinse the split peas and add them to the pot along with the sweet potatoes, the dry spices, and the bay leaves.
~ Stir to coat, raise the heat to high, and add the vegetable broth. Cover and bring to a boil, then turn the heat down to low and simmer for about an hour, stirring occasionally.
~ When the split peas are tender, add the coconut milk, the baby spinach, and the hot sauce; cook about 5 minutes more, until the spinach is just wilted.
~ Fish out the bay leaves, taste for seasoning, and serve hot. NB that this makes great leftovers, but like all legume-based soups, it may thicken a bit as it stands; just thin it with a little extra broth or water when reheating.
Posted by Desdemona at 12:00 AM 2 comments: Links to this post 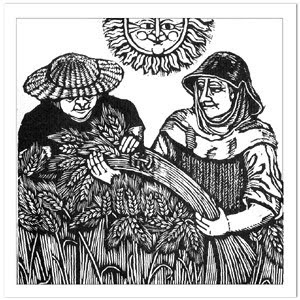 There were three men came out of the West,
Their fortunes for to try,
And these three men made a solemn vow:
John Barleycorn must die.

John Barleycorn is the personification of grain, and there are versions of this song stretching back to at least the Middle Ages. The narrative begins with his first death, when he is "ploughed, sown, [and] harrowed" in, with "clods thrown on his head"; by midsummer, he has "grown a long, long beard, and so become a man," and endures a second death in the form of the harvest. Although this entails further indignities - being cut off at the knees by "men with scythes so sharp" who use pitchforks to "prick him to the heart" before turning him over to the miller, who "grinds him between two stones" - he comes out on top after his transformation into beer and brandy, when "little Sir John in the nut-brown bowl proves the strongest man at last."

The song stresses the use of barley in brewing and distilling, but of course it was also used for food, especially among the working classes who lacked access to the fine wheat reserved for the wealthy. Chaucer's Wife of Bath refers to this homely grain in her comparison of the relative virtues of chastity and marriage:

Word. "But what does all this have to do with soup?" you may ask. Well, John Barleycorn is not only great in the nut-brown bowl and the breadbox, he also makes a rich, hearty soup that's especially suited to winter. When I was growing up, my mother often made beef barley soup (or Scotch broth, which uses lamb), and it was a big favorite of mine. For some reason I've been missing her a lot lately, and sometimes I find it comforting to recreate things she used to cook. Looking through my supplies, I noticed the very last of the barley from when my sister and I cleaned out our mom's madly overstocked kitchen 18 months ago (after growing up in WWII England, she was never going to run out of food again). My course was clear: I used soy curls for the "meat," Better Than Bouillon's "no beef" flavor for the stock, let it all bubble away on the stove for an hour, and the result was remarkably like my memory of the original. It was a big hit with the hungry humans and animals with whom I share a home, and produced a healthy amount of leftovers. Best of all, it made us feel a little closer to Nana, who was always in favor of a little barleycorn.

For the huntsman, he can't hunt the fox,
Nor so loudly to blow his horn,
And the tinker he can't mend kettle nor pot,
Without a little Barleycorn.

Directions
~ In a pot or beaker, combine the broth, tomato paste, Worcester sauce, paprika, Marmite, and bay leaves. On the stove or in the microwave, bring to a boil, stir well, and add the soy curls. Cover and allow to marinate for at least an hour (the longer they soak, the more flavor they'll absorb).
~ In a large pot, heat the olive oil and sauté the onion over medium heat about 3 minutes. Add the garlic, the celery, and the carrots, and cook about 5 minutes more, until just softened.
~ Add the mushrooms and the dried seasonings, stir well, and cook another 5-7 minutes, until the mushrooms have given up their liquid.
~ Add the barley, cook for a minute, then pour in the red wine. Allow to cook a few minutes while you drain the soy curls and set them aside (reserving the liquid!).
~ Pour in the reserved broth mixture, raise the heat to high, and bring to a boil. Reduce the heat to low and cook for about 30 minutes, stirring occasionally.
~ Add the drained soy curls and continue cooking another 15-20 minutes, or until the barley is tender.
~ Remove the bay leaves and serve hot with crusty bread (all the better if it's a little stale).
Posted by Desdemona at 12:00 AM No comments: Links to this post